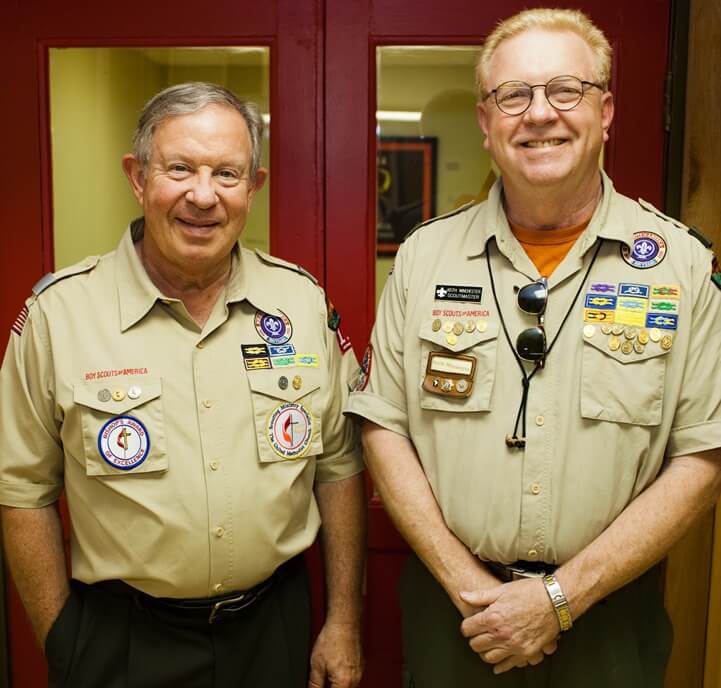 Thirty years ago the president of the local college escorted Keith Winchester and Montee Sneed into his office.

“I have a project for you,” he began. “It is a thankless job and no plaques or awards will be given to you for the work.” “However, it will only take an hour a week,” he said as he invited them to become unit commissioners for the Boy Scouts.

“But, we don’t have any children,” the men complained as they signed up for what appeared to be a one-hour weekly commitment.

“I can’t believe he used the “Only one hour a week” line on us laughs Keith, who now serves as scoutmaster of a troop chartered by First UMC and Columbia, TN. Keith eventually did have two sons who joined and benefited from scouting. His son, Rob, became an Eagle Scout. Keith also went on to serve in other scouting roles including cub master. He has graduated from Wood Badge and the College for Commissioner Science. He is a recipient of the UM Cross and Flame Award and the Long Rifle Award. He also served as district commissioner and chair of the Round Table, and his troop received the Bishop’s Award of Excellence.

Montee serves as the chartered organization representative and heads the scouting ministries for Columbia First UMC. He is heavily involved in children’s ministry and currently sponsors the Scout Troop, two Cub Scout Packs and three Girl Scout Troops. His son, Thomas, became an Eagle Scout. Montee has served as a cub master, unit commissioner, district committee member, and he serves on the governing board of the BSA Middle Tennessee Council. He is a recipient of the Cross and Flame Award, The Torch Award, the Daniel Beard Masonic Scouter Award, and the Long Rifle Award. First UMC has been recognized as a Shepherd Church for its scouting ministry.

Both men have served as presidents of UM Men in their local churches. “UM men have an important role to play in the struggle to save our kids,” says Montee, a life member of Columbia First UM Men. “I think that what keeps us going is we can see firsthand the impact that scouting has on our kids,” said Montee. “Boy Scouts, Girl Scouts, 4-H, and Boys/Girls Clubs are bout the only things out there providing character education. “Keith and I are now seeing the children of some of our original kids come back to us.”